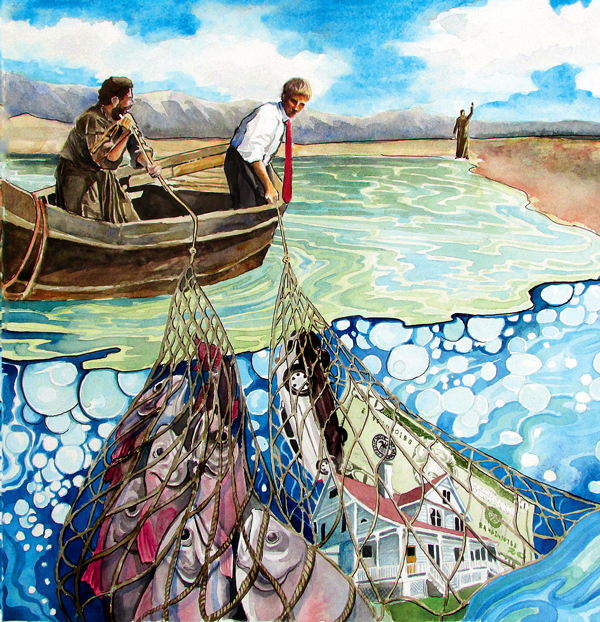 It is crucial to pay attention to the way of the apostles, the men who were closest to history’s greatest event: the life, death, and resurrection of Yahshua1 the Messiah, the Savior of the world. The reason these disciples who walked with Him held a common purse and established a common-purse community after Pentecost was that the gospel that was preached to them required it. It was not a “rule” or “law” of discipleship, but it stemmed from the core purpose and the very essence of the message of the cross.

The gospel they received was a gospel that actually required utter surrender. They had received the call to love to the fullest, which meant total devotion in service to God. This was non-negotiable. It was the call out of complacency, the call to give Him all of your heart (ambitions and desires), all of your soul (thoughts and opinions), and all of your strength (your physical being and all of your resources). The gospel they received made no allowance for them to retain sovereignty over their finances, and this was the same gospel they preached to others. It was not that the apostles demanded all pocket change to be handed over to a central fund for equal distribution, but true love compels one to make all that he has available for the good of others.2

These were the ones in whom was kindled the burning desire to see the Kingdom of God come in its fullness, and all that they had and were was devoted to this cause. It reaches far beyond mere finances. It is a deep matter of the heart and soul. The gospel Yahshua preached actually calls for the surrender of personal sovereignty over not only material goods, but over every aspect of your existence.

It is essential that anyone who says he is a believer would know exactly what he is supposed to believe, that is, what Yahshua taught. Did He give His followers any liberty to indulge in their personal pursuits and self-oriented desires? Or did He teach His followers to live selflessly and by His Spirit put to death the deeds of the flesh, with its passions and desires, that they could be fully please the One who called them? How much room is there for a disciple to compromise? How narrow is the narrow way? Shall we demand that God negotiate? 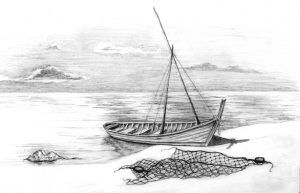 The Master called His followers to walk as He walked, which began by first disconnecting from all worldly passions, pastimes, and possessions, as these things would only prove to be a stumbling block to the cause. He taught this uncompromising truth: “No one can serve two masters.”

In order to share all things in common as the first believers did, there must be a basis greater than mere doctrine. It must be that Messiah’s sacrifice is as a sword that pierces straight to the core of one’s soul. We see His noble, selfless offering and it convicts us of our petty selfishness. His sacrificial life for us calls us to respond by emptying ourselves of all our resources and losing our lives as a corresponding sacrifice.

For you know the grace of our Lord Jesus Christ, that though he was rich, yet for your sake he became poor, so that you by his poverty might become rich.3

The terms are life for life — His life for ours. This is the spiritual foundation that He established. He gave all so that we would also. Our response to His kindness, and the kindness of those who revealed Him to us, is what enables us to reach His blood to cleanse us from our guilt. We put ourselves unreservedly in His hands. But we can only embrace this level of devotion and its demands if we have been cut to the heart to hate our own compromise and hypocrisy in light of His pure offering. This revelation brings us to an end of self-life and causes us to cry out, “What must I do to be saved?”

When this love of God is revealed to us, all that is left is to spend the rest of our entire existence in response. Until we reach this point of humility and brokenness of heart, the justifications and excuses of self-life, the twisting of the sly, crafty serpent, keep us imprisoned to the god of this world.4 This response of humility is the end of personal, petty, selfish desire and ambition, and enables the love of God to be poured out into our heart. When we have entered through this gate of compassion and love, it causes us to lay down our lives and die to ourselves for the sake of others, as He did.

When His love reaches our heart, all the values of the world are flipped upside down. What becomes important is no longer ease, comfort, wealth, or success, nor even our own food, clothing, or shelter. We can then see the futility of our own riches.5 What becomes of the greatest value is righteousness, godliness, faith, love, patience, gentleness, showing utmost hospitality, and of course, salvation.6 This is seeking first the Kingdom of God and His righteousness.

All who believe this message can’t help but share all things in common. This is why there was a common-purse community in the beginning. It could be no other way. The Royal Law of Love inspired and compelled this response, stating, “You shall love you neighbor as yourself.” Their forgiveness also required it, as the Master said, “He who has been forgiven much loves much.” This love has to be in deed and in truth.

Right from the start of their calling, all the apostles surrendered everything to follow their Master. They were called to voluntary poverty. This was their only foundation in their pursuit of godliness. It didn’t mean that they would not use money, but that all they had was for the good of all — no longer their own.

Yahshua and his disciples had a common purse. The Master was establishing the economics of His kingdom, not making a mistake. Being the keeper of this common purse, Judas fell into covetousness7 and ultimately betrayed the Son of God. The error of his way was not the fault of the common purse, but it was his rejection of the demands of the cross. Judas’ betrayal was a rejection of the call to deny himself.

Give, and it will be given to you: good measure, pressed down, shaken together, and running over will be put into your bosom. For with the same measure that you use, it will be measured back to you.8

Whoever would surrender all he has would gain a hundredfold in this life, and that would lead to eternal life in the age to come. All they had became for the good of all. When all did this, then all had their needs met.

With the necessity of their unity in view, they were keenly aware of the dangerous desire for personal wealth, as it guarded the high, impenetrable walls of self-life9, and was in direct opposition to their common cause. Independence was contrary to the common purse, and was a cancer to their “body” of fellowship.

Yahshua had entrusted His closest disciples with all that He had been given by the Father, and He trusted that they would continue steadfastly in His teaching after His departure. As confirmation that their training and discipleship had been successful, the community described in Acts 2 and 4 came about. They clung to the pattern that they had come to know and love from His intimate shepherding of their lives. It had to be a common purse. 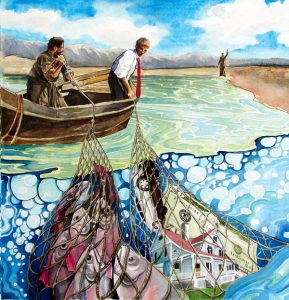 What do the fishing nets the first disciples were called to leave, mean for us today?

Thereafter, all would become disciples heard the same piercing call as they had, and laid all their resources at the apostles’ feet. They left behind their self-centered lives and entered into the reality of the fellowship of the believers. This pattern of discipleship established a witness of love and unity10 — living together and sharing all things in common. This pattern was established before the New Testament was written down, long before the now-commonly-accepted Christian doctrines slithered in to replace the genuine life of the disciples.11 It was the life that came forth from Messiah’s death, the response of the heart to His sacrifice and His call upon their lives.

So this puts forth a few very deep, pertinent, and controversial questions that should shake the foundations of what one is building upon: 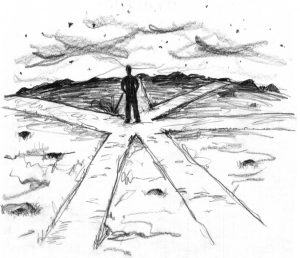 If you don’t know where you are going, any road will take you there!

We confidently say “YES!” The Master’s difficult sayings have been glossed over and the easy ones emphasized to the extent that the process of becoming a Christian bears no resemblance whatsoever to what it took to become a disciple in the first century. Since the rules of the race have been so drastically altered, it doesn’t matter how one runs, or in what direction.

Those who are truly being called by God earnestly grope with these questions. They see that there has been a twisting of His message which has produced a “half gospel” that requires no toil, no tears, no death. But by a person’s sincerity, he knows that when the gospel is altered, the fruit is altered. If you change the recipe, you don’t get the same cake. No cross to die on means no life of Messiah coming forth. As He taught, “Unless a seed falls into the ground and dies, it remains alone, but if it dies, it bears much fruit.” Without the radical call of the apostles’ gospel, there is not the radical life of the first believers.

How is greed checked in the life of a Christian today? Who sets the standard? Was God too hard on Judas, or on Esau, or on Ananias and Sapphira? Is greed or selfish ambition still considered sin in the church?12 Or has the great wealth, comfort, and ease13 of Western civilization overruled the pattern of the common-purse community that was so integrally part of the apostles’ foundation and gospel? Does all still mean all? Does Messiah’s death still deserve the same response?

Back on the Mark 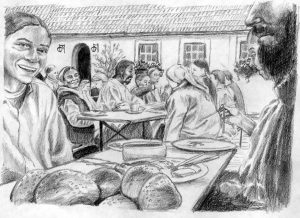 Community… the changeless outcome of the gospel.

So there must be a practical, tangible way for a believer to respond and put in practice such a radical call. In reverting back to the original gospel you will find that you must also revert to the same lifestyle that they lived — together, sharing all things in common.14 This comes right down to what do you do with your own time and resources. This gospel tests the heart, as one is truly confronted with that very important and qualifying decision of whom they will choose to serve — God or mammon. In these small things it is revealed who you are really serving.

Let no one think that what happened in the beginning, when all the believers shared all things in common, was for that time alone. It was actually a standard, a mark of the changeless outcome of surrendering to the terms of the gospel that was preached by none other than the Son of God.